Flagship independent quarter business Scoots, Suits and Boots has announced it will close by the end of January. This comes fast on the heels of news that Frilly’s will close after thirty years in business. It is time Labour Oldham politicians most notably MP Jim McMahon and his council leader successor, Jean Stretton, were held to account for the excessive costs of multiple business, regeneration and social project’s that fail businesses and the Oldham people. Oldham Council’s sanitised and inaccurate projection of a booming Oldham town centre really does fail the independent businesses that are tempted by OMBC’s future pot of gold at the end of the rainbow scenario. Earlier today, before we found out about the closure, we compiled a list of quotes from the Greater Manchester Spatial Framework documents regarding Oldham. Time and time again the document identified the Oldham Town centre wards as having anomalous characteristic’s, everything from ethnicity to age group percentages, gender inclusion discrepancies to economic activity levels or the lack of them. It may not be PC but we would not open a business within the economic quagmire Labour Oldham have created in Oldham town centre through decades of  political and economic policy mismanagement. Here are some of the spatial framework quotes we highlighted on Twitter earlier today.

“the central part of Oldham has 5 of the 7 Greater Manchester wards with the highest proportions of dependent children.”

“Oldham has the highest proportion of households containing six or more people, followed by Manchester and Rochdale.”

” the three wards of Coldhurst, Werneth and St Mary’s around Oldham Town Centre all have more than 15% of their households consisting of at least six people,”

“Three of the wards in Oldham have particularly high levels, with 20% of households overcrowded in Coldhurst, 19% in Werneth (the two highest levels of overcrowding in Greater Manchester) and 17% in St Mary’s.”

“The highest concentrations of concealed families (Multiple families in 1 household) are seen in the central Oldham wards of St Mary’s and Werneth, each of which has more than 260 concealed families and over 190 are located in neighbouring Coldhurst, with relatively high numbers in some of the other adjoining wards.”

“wards with the highest proportions of residents aged 0-17 are in the central parts of Oldham and the three wards St Mary’s (34.6%), Coldhurst (34.0%) and Werneth (33.4%) are the only three wards in Greater Manchester where more than one-third of the residents are in this age band.”

“More than 60% of the population of the three adjoining wards of Werneth, Coldhurst and St Mary’s in Oldham is Asian/Asian British, with the first of these exceeding 71%, which is the highest in Greater Manchester. More than 60% of Coldhurst’s population is Bangladeshi – the highest proportion in the country and almost half of the population in both St Mary’s and Werneth is Pakistani, putting them in the top fifteen wards in England in terms of the proportion of their population in this ethnic group. Medlock Vale and Alexandra just to the south of Oldham town centre have more than a quarter of their population who are Asian/Asian British, mostly Pakistani in each case.”

“Less than two-thirds of the population of Coldhurst and Werneth in Oldham were born within the UK and the figure is just over 70% in neighbouring St Mary’s.”

“The other main clusters of low economic activity are in the central areas of Bolton, Rochdale and Oldham, with Coldhurst, Werneth, St Mary’s and Alexandra in Oldham all amongst the wards with the lowest rates”

“The main clusters of wards with high proportions of residents who have never worked or are long-term unemployed are around the inner areas around the city centre and around the town centres of Oldham, Rochdale and Bolton. The three wards of Coldhurst, Werneth and St Mary’s in central Oldham form a particularly high concentration of such residents, with more than 22% in each having never worked or being long-term unemployed”

“Nevertheless, there are quite extensive areas of Greater Manchester dispersed across all districts that appear to have modest net outflows of economically active people which is unlikely to be associated with the movement of full-time students. Some of the highest such net outflows are from around Oldham Town Centre.”

“The wards with the lowest proportions of in-migrants aged 16 and over who were economically active were focused very much around the central parts of Oldham, Rochdale and Bolton. The five adjoining wards of Werneth, St Mary’s, Alexandra, Waterhead and Coldhurst in Oldham were all below 65%”

“There was a large area of wards with low proportions of in-migrants in occupation classes 1 and 2 extending through central and south Rochdale, north Manchester, most of Oldham, with other key areas including central Bolton and the middle of Wigan. The very lowest proportions were focused around the town centres of Oldham, Rochdale and Bolton, with the seven adjoining wards of Alexandra, St Mary’s, Medlock Vale, Werneth, Coldhurst and Waterhead in Oldham all having less than 16% of their in-migrants in occupation classes 1 and 2.”

“Most of Rochdale and Oldham had quite modest inflows of people in intermediate occupations, as did quite large parts of Bury, much of west and central Wigan and the area around south-west Salford/north-west Trafford, with three of the five lowest inflows to the Oldham Town Centre wards of Coldhurst, St Mary’s and Werneth.”

“The area stretching through Manchester and the central spine of Rochdale formed a broad expanse of wards with low proportions of in-migrants in intermediate occupations, with the areas around the town centres of Oldham, Bolton and Wigan also having low levels. Indeed, Coldhurst and St Mary’s in Oldham had the lowest proportions in Greater Manchester, with Alexandra, Werneth, Waterhead and Hollinwood also in the 14 lowest and these wards were also amongst the lowest for the proportion of in-migrants in higher level occupations.”

“There is quite an extensive area stretching through central Rochdale, north-east Manchester, Oldham and into Tameside which had high proportions of in-migrants in routine and manual occupations. Hollinwood in Oldham had the highest proportion at more than 56%, with several nearby wards in Oldham above 45%”
The first three quarters of 2016 have delivered record numbers of foreign migrants to the Oldham town centre wards with over a third coming from Romania. 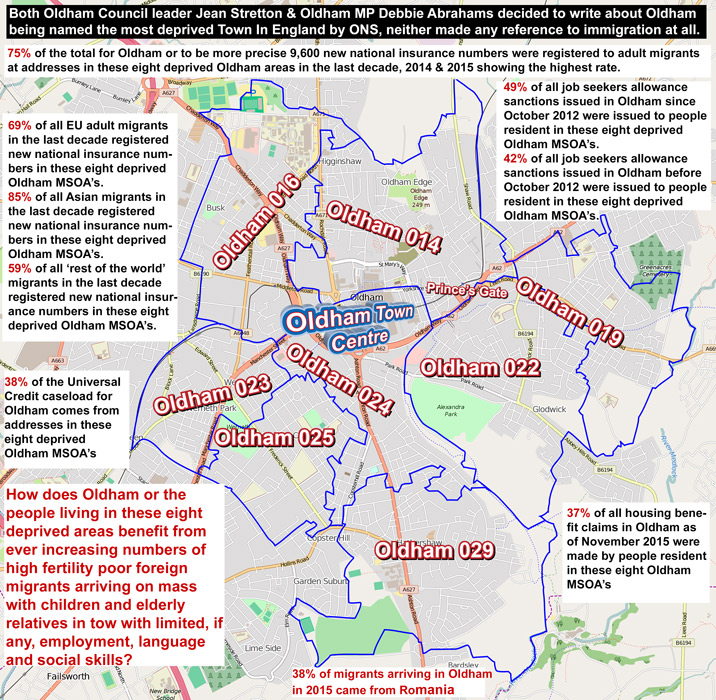 In August 2016, St Mary’s (014), Hathershaw (029) & Coldhurst (016) accounted for 19.8% of all Oldham housing benefit claims. St Mary’s (014) houses 8.6% of Oldham housing benefit claimant’s the highest rate in Oldham & 59% of ward females are economically inactive. So how will the planned 800 new homes that straddle St Mary’s (014) and Oldham Town Centre (024) benefit the Oldham economy when so many already directly and indirectly contribute nothing but put huge pressure on services and infrastructure? (024) currently has the highest immigration rates in Oldham with over 55% of migrants in 2016 being of Romanian nationality & over 76% originating from impoverished Eastern European EU2 & EU8 countries.

Oldham ward’s have the highest percentage inflow of unskilled migrants in all Greater Manchester. Clearly Oldham Council is more concerned with increasing council tax and footfall in Oldham Town Centre regardless of the fact money spent will come from council tax benefit, tax credits, child benefit, housing benefit all of which are subsidised by the few who pay for the many. Continuing to import poverty on mass to the poorest town in England with no strategy except see no evil hear no evil speak no evil is yet another socialist long term economic and social disaster in the making, you really could not make it up. 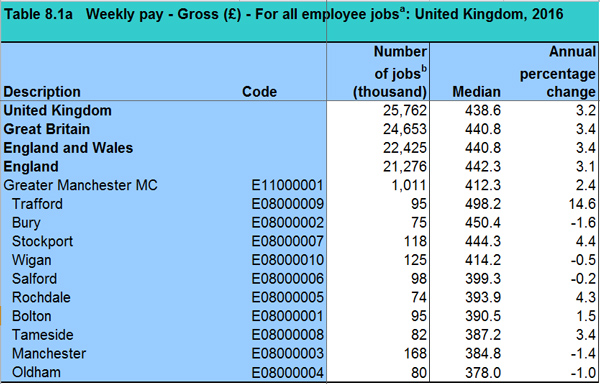