Oldham Pro-EU politicians Debbie Abrahams Jim McMahon & Angela Rayner have combined to deliver a joint “IN” blog published today that sets out why the EU is Great for Greater Manchester. This is an article, as is to be expected, full of cherry picked statistics presented in isolation without relative data and wider context. They present for the uninformed a celebration of the generous gifts bestowed upon us by the European Union, they write  “by 2020, EU Structural Funds will contribute £356m across Greater Manchester” The amount received is actually £323 million after an 18% loss in funds due to fluctuating pound euro exchange rates. The money covers 6 years funding, £53.8 million a year in an area that already spends £1 billion a year on in-work tax credits. This £53.8 million is then unequally spent between the 10 local authorities currently being amalgamated into a devolved Greater Manchester with centralised control in the City of Manchester. Unlike the momentous EU membership vote this Thursday when it came to local democracy all your local politiicians voted against you, Oldham residents, having a vote on Greater Manchester devolution just as quickly as they concede our democratic right to self-govern by handing power over to unelected EU officials. The Greatest untruth within the EU funding quote is the inference that this money is for GM residents, it is not, it is to facilitate the unnatural & unsustainable rates of migration and population increase in our area. The Greater Manchester Combined Authority’s own documents on EU funding state “Manchester’s population is the fastest growing in the UK which presents a massive opportunity to link the jobs we create with providing places to live that encourage people to stay and contribute to success. But it also presents huge challenges: an aging population, concentrations of unemployment and low skills and changes to the welfare system mean that demand for services will only increase without radical reforms.” 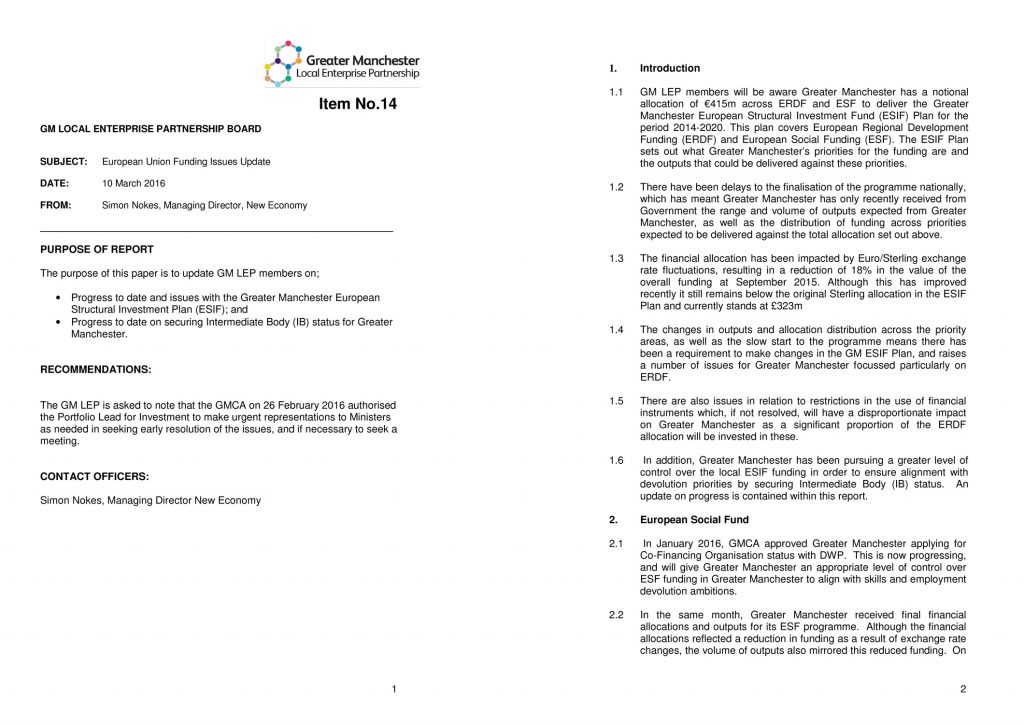 We then move on to the next little gem immigration, which again is presented out of context with other data and infers there is no middle ground just pro-migration & anti-migration a most ludicrous argument that attempts to apply economies of scale to England which is already the most densely populated Country in the EU, they write “But we must also understand the huge role that migrants have and continue to play in our economy, for example, with approximately 1 in 4 doctors coming from abroad, 1 in 5 care workers coming from the EU, as well as 130,000 NHS workers” What they failed to point out is that 53 percent of population growth in the UK between 1991 and 2014  was accounted for by net migration or that over 92% of those migrants made their homes in England and those percentages do not include the resultant additional population increase when these immigrants subsequently have children born in the UK. The annual hours and earning survey showed that in 2013 Oldham had 10,709 fewer workplace jobs than in 2004 and national insurance statistics show the wards surrounding Oldham Town Centre alone have accomodated more than 9,630 adult migrants in the last decade making a job shortfall of 20,339. In April this year 25,252 people attended Oldham’s Pennine Acute Hospitals NHS Trust A&E department, the third highest rate in England after two trusts based in London. There is also the Migration Advisory Committee report that showed nursing shortages in the NHS are caused by a lack of in-house training and access to cheap foreign labour. 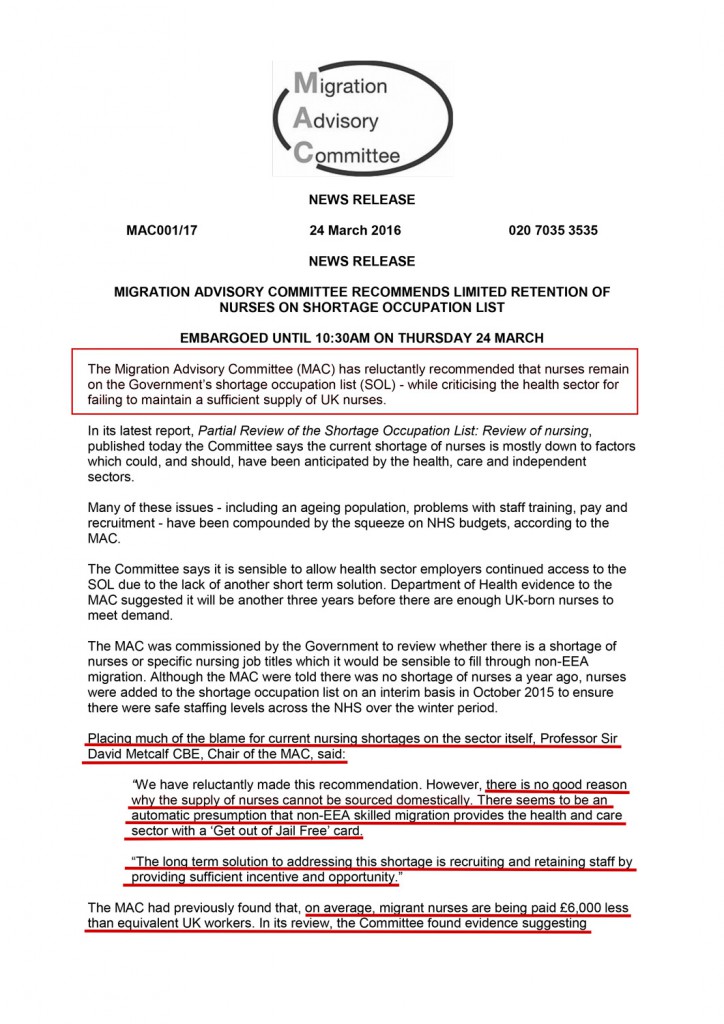 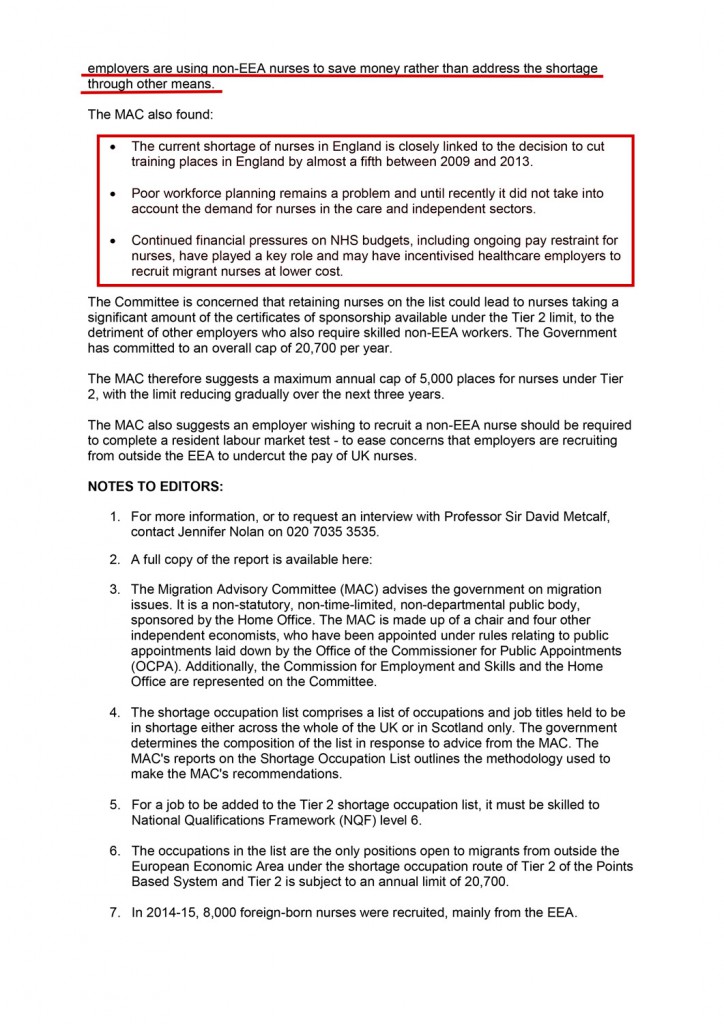 We are not going to spend the next important pre-referendum hours trashing every claim they make we suggest you do your own research and ask the important questions. For example why do these politicians quote the IFS and hold their opinion in high regard when they issue financial predictions that support the “IN” campaign yet the very same IFS completely failed to predict the global financial meltdown of 2007-2008? 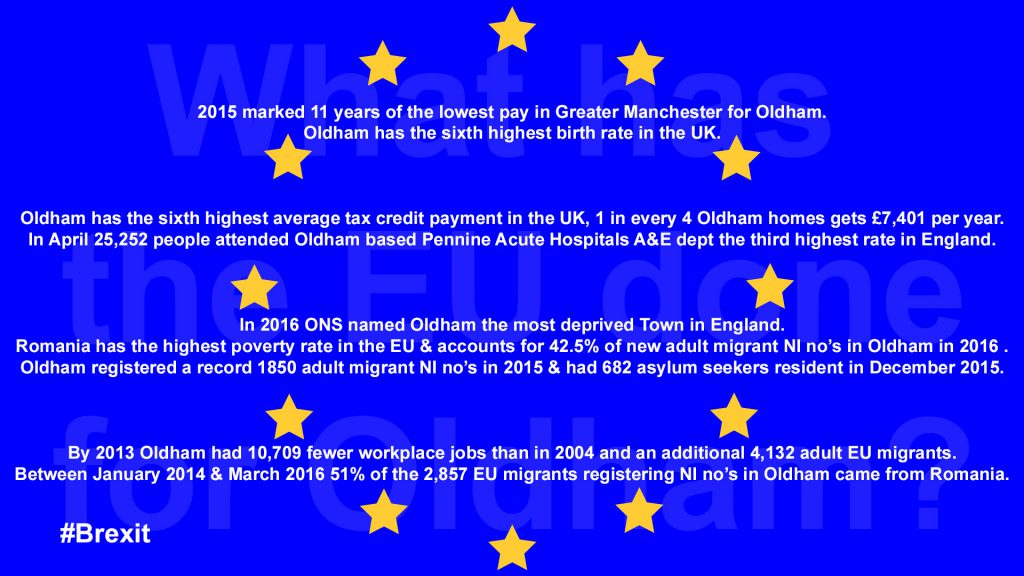 What has the EU really done for Oldham?