It is the first truly sunny day of the year more people are out and about and Labour Oldham start their election campaign in Oldham town centre. The High St where the photographs below are taken is part of the Coldhurst ward which has the biggest Bangladeshi community in the UK. Despite this once again Labour and suffragette champion MP Jim McMahon and Oldham council leader and devolution lead for equality and cohesion at the GMCA Jean Stretton can’t find any south Asian heritage women from Coldhurst, Alexandra, Werneth or St Mary’s to join the campaign. Despite Asian women’s sweeping (postal vote) support for Labour in Oldham we have only ever seen three Asian women out and about for Labour Oldham, Jim’s assistant Arooj Shah, an ex-judge from Afghanistan who works for Debbie Abraham’s and the ex-Oldham mayoress. Labour’s 2017 election leaflet says for the many not for the few, these are completely empty words from a party that won’t challenge Oldham’s culturally embedded sexism and on the local level a party that openly promotes multiple spending and policy incentives that exclude entire areas. The leaflet should mirror Labour Oldham council’s Twitter feed which states on a daily basis follow us for news that could affect your benefits. Labour should also add to this with follow Labour if you want your patriarchal archaic cultural hierarchy to continue unchallenged. Labour Oldham politicians will remain silent on the rights of the individual to defend the right for sweeping gender oppression under the guise of cultural norms. 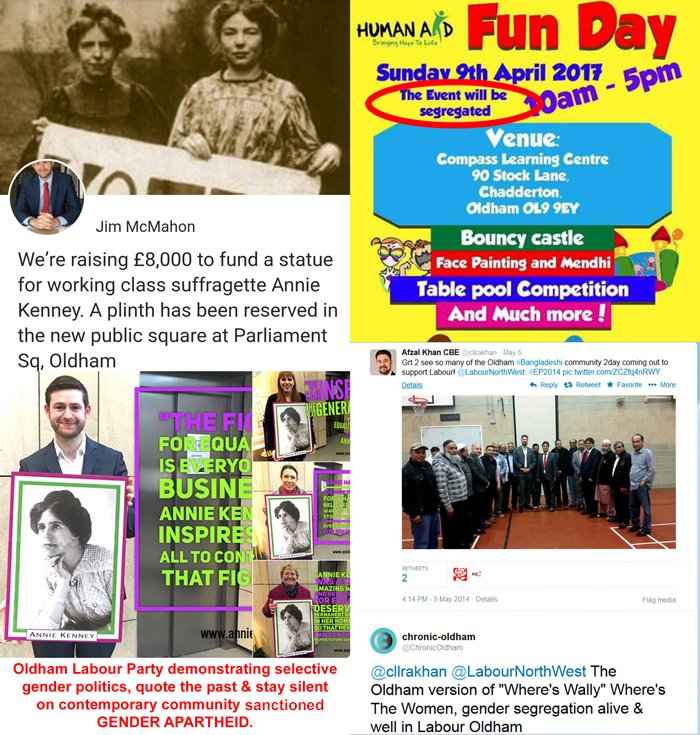 Oldham’s deprivation will never be fixed until politicians challenge head on the incompatible cultural and religious practices perpetrated and promoted by men that seek to keep women in their perceived place.