I can’t believe that twice in a single week, including North West Tonight last night, we have had religious loons in Oldham talking on the BBC about the possibility of fresh riots in Oldham over same sex education in schools & neither of our spineless Labour MP’s or the Labour council leaders have said a word. If this had been far right loons talking about riots it would have received the full attention of all the Labour politicos and their Oldham press bedfellows. Of course it’s only a few weeks till the local elections and Labour Oldham clearly do not wish to upset the applecart and their central Oldham core voters after they have previously lost out to independent candidates in safe wards. It’s completely unacceptable and ludicrous that these incompetent socialist politicos have permanent blinkers on when it comes conservative migrant communities, we have Debbie Abrahams quite rightly talking today about far right threats to MP’s yet she says nothing about people in her constituency talking about mass rioting. Council leader Sean Fielding is far too busy on Twitter picking apart UKIP candidates in the Labour safe seat Failsworth to be commenting on people stirring up civil unrest. He also forgets that when it comes to disreputable people in politics Labour Oldham turned a blind eye for years to a councillor convicted of benefit fraud, a councillor convicted of employing illegal workers & a councillor whose h&s failures nearly caused the death of an employee. All three committed their offences while serving as councillors for Labour and all three are still councillors two for Labour and one now an independent. 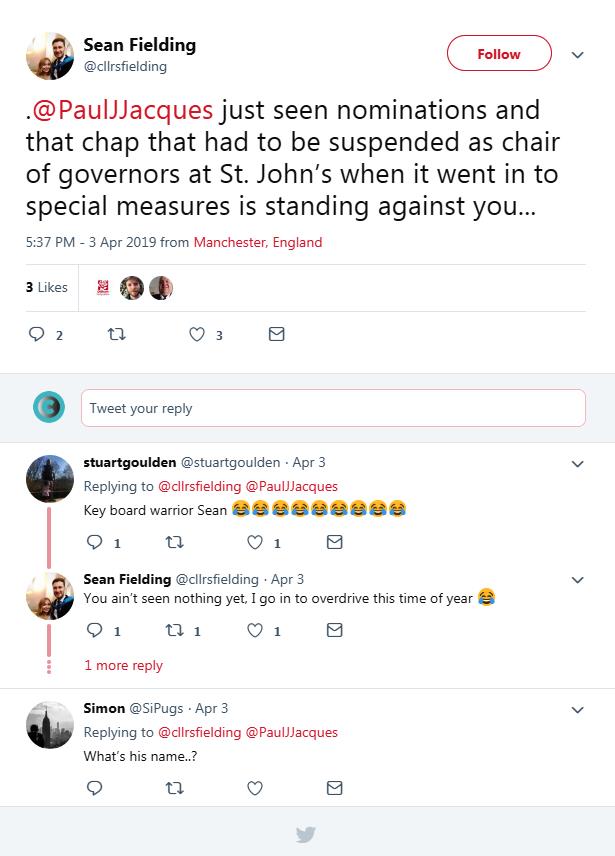 Sean Fielding too busy to deal with people inciting violence