Using official statistics from the Department for Work & Pensions some additional research and calculations it is possible to analyze which areas of Oldham at the ‘middle layer super output areas’ (MSOA) level have the most claims for housing benefit, which areas have seen the highest increase in claimants and what the approximate cost of housing benefit in these areas is. It comes as no suprise that Oldham Council’s misguided PFI regeneration policies which have already added hundreds of millions in public sector debts are also increasing the boroughs benefit bill. The four areas of Oldham with the highest increase in housing benefit claims compared to 2011 are all PFI housing areas. 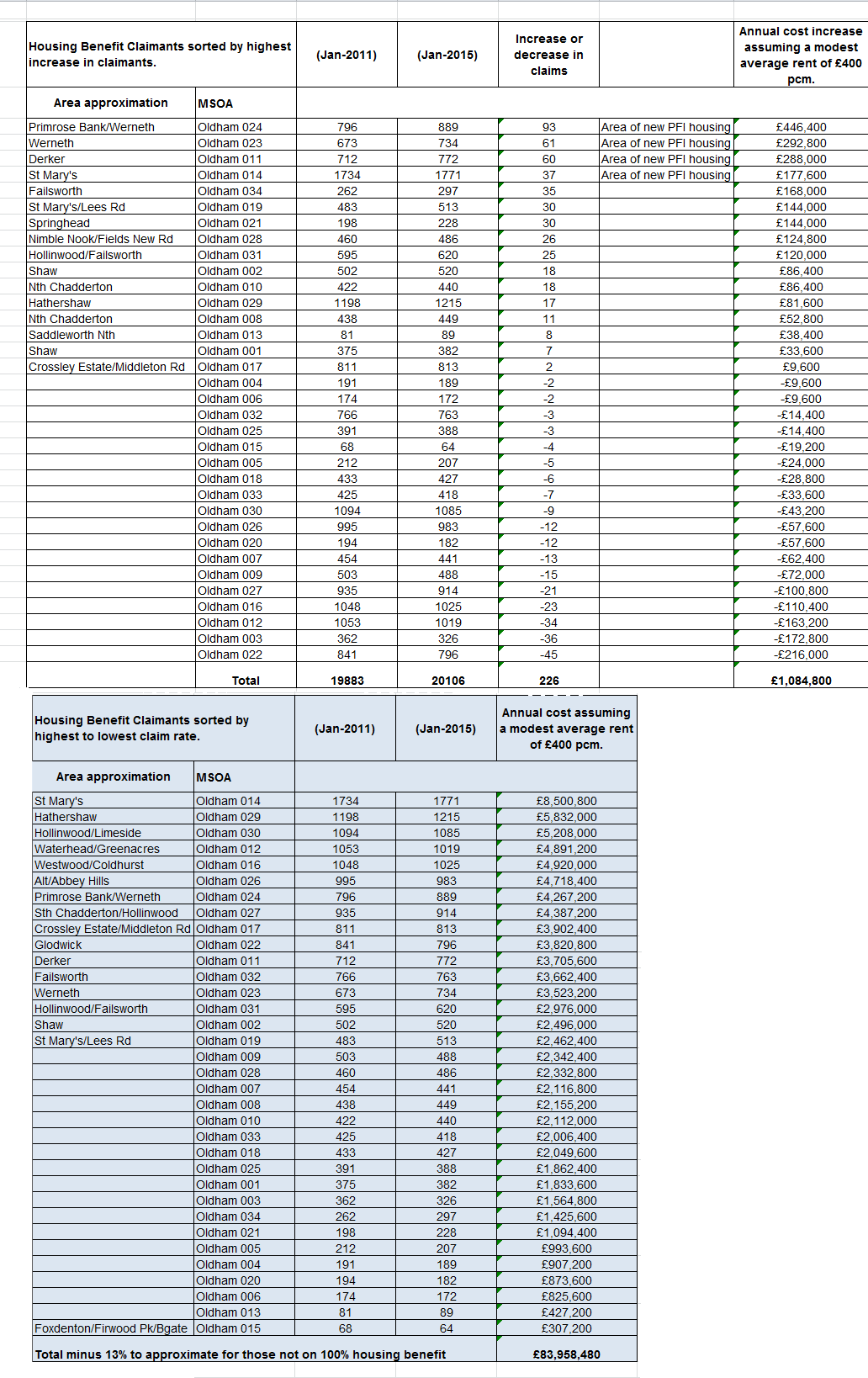 Oldham Council relies on housing benefit, council tax benefit and tax credits just as much as the claimants do and along with their plans to expand Oldham’s job opportunities in the lowest paid employment sector “wholesale and retail trade, transport, accomodation and food services”, which in July 2015 paid an average of £138 per week less than any other sector, they will continue to create the human equivalent of negative equity. A self-perpetuating indebted economy that is always in debt and that only functions with the exponential expansion of the population, housing and incoming benefits with every new generation but which ultimately whilst servicing past debt also increases it. In 2014 we had 13,746 fewer adults living in homes where all adults worked than in 2006 a relative fall of 18.3%. There were 20,348 adults in completely workless households in 2014 a 1,376 reduction compared to 2006 which is a relative fall of 4.5%. The biggest change came from mixed households where some adults worked and some were workless which increased by 12,360 people to 61,418 adults a 27.6% relative increase from 2006.

Here in mixed households lies the middle ground where the highest birth rates in Greater Manchester thrive driven by indigenous communities and large volumes of migrants often working only part time who are subsidised by housing benefit, child tax credits and in-work benefits such as working tax credits. The combined cost of both types of tax credits in Oldham is £166 million a year which is over nine times more than the job seekers allowance bill. The maths do not add up this type of social model is unsustainable, in 2013 the ONS workforce survey showed that Oldham had 10,709 fewer workplace jobs than in 2004 and mid-year population estimates showed an underestimated 8822 increase in the number of residents for the same period. What are Oldham Council’s answers to the problem is it “Get Oldham Working”? In just fifteen months foreign nationals registering for new National Insurance numbers in Oldham surpassed actual jobs created by the “Get Oldham Working” scheme in a twenty two month period by 68%. 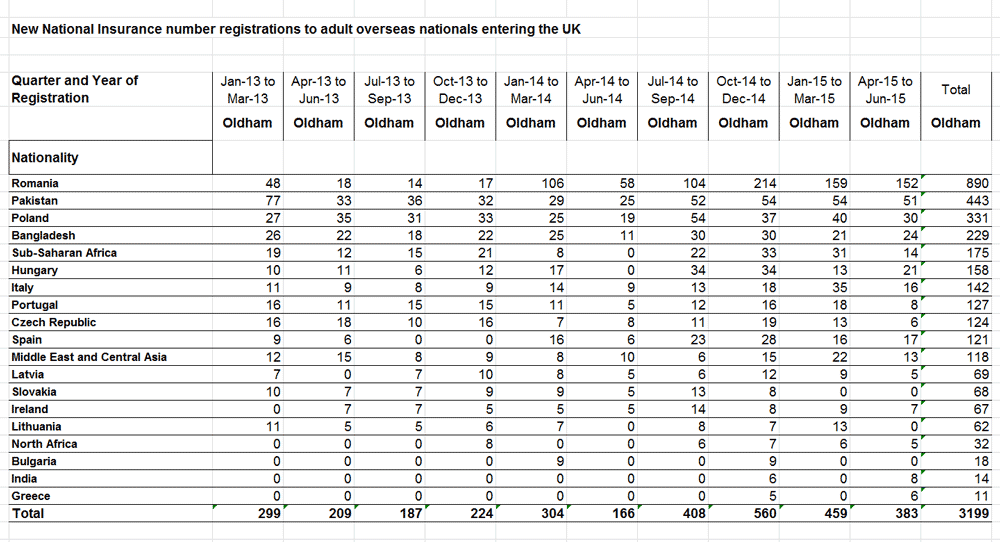 Is the answer Oldham Council’s “WorkingXtra” scheme? “The WorkingXtra criteria rewards those applicants on the housing register who are working more than 16 hours or are actively volunteering or making a contribution to the community” identifying people who work just sixteen hours per week with the idiom ‘Xtra’ tell’s you more about the noncontributory composition of many social housing tenancies in Oldham than it does about what is considered as extra in the real world.

Is the answer AGMA and the GMCA in a devoluted Manchester? The problem here remains the same as before it is the same politicians in a different location with even more powers. These politicians will continue offering disproportionate policy, support and finance aimed solely at core family unit voters many of whom, in Oldham at least, are responsible for the huge benefit bill which in part drives the cycle of multigenerational deprivation. Benefits generally and tax credits specifically suppress local wage rates and create public indifference to the tens of millions taken directly from scarce local public sector budgets and resources to be spent on so called regeneration projects because it is paid for by a taxation system that in real terms they never contribute to. AGMA’s four latest Housing and Planning Commission proposals submitted for Government funding has two sites along the Manchester corridor around Oxford Road which are looking to expand the “life sciences” sector, in the second bid another three Manchester sites have been submitted this time for the expansion of the creative & media sector, a third bid was submitted to help fund the continuing Town Centre’s regeneration project and a final proposal to increase the low paid logistics sector at Bury, Oldham, Bolton, Wigan and Rochdale, this sector has the lowest Gross value added (GVA) ratio as a percentage of turnover of any industry. 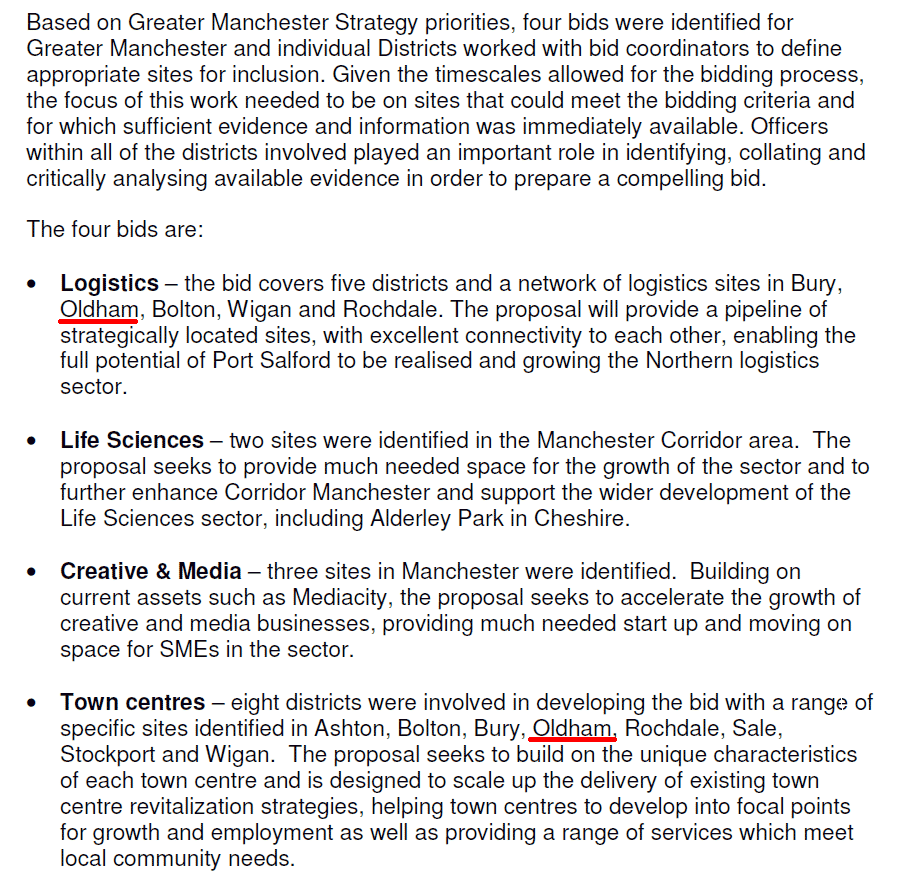