Oldham Councillor for Coldhurst, Montaz Ali Azad, has been disqualified as a director after an investigation found he had allowed his laundry company to employ three illegal workers. His official declaration of interests at Oldham Council shows that his spouse continues to operate a laundry business on Union Street in Oldham. 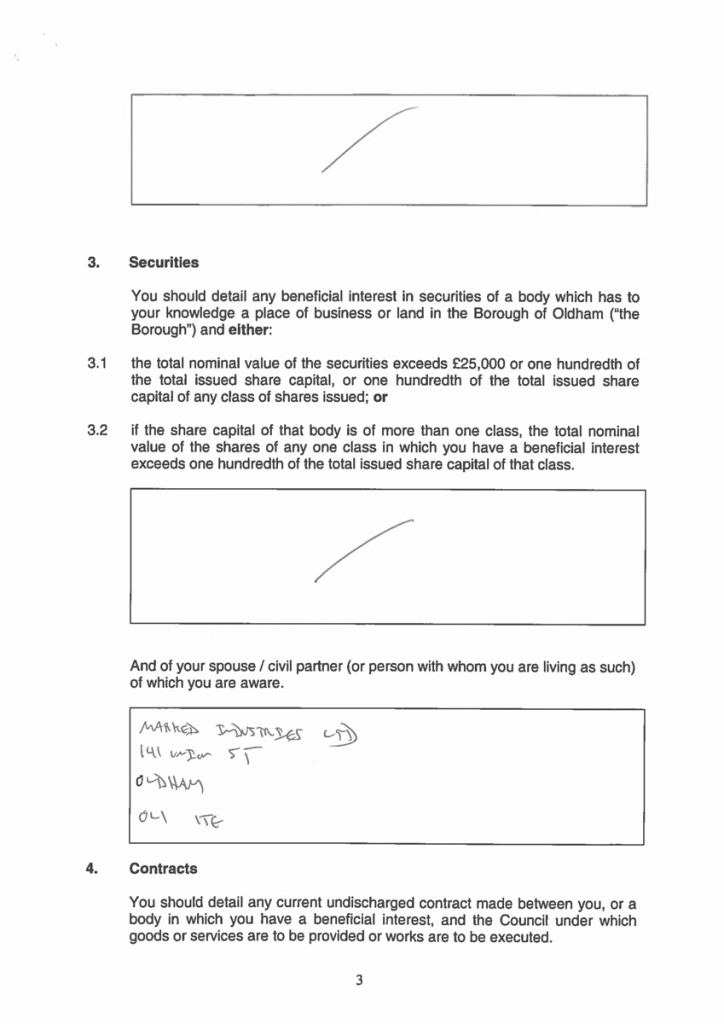 “Mr Montaz Ali Azad, who ran Eurolinen UK Ltd which traded as an industrial laundry in Greater Manchester has been disqualified from acting as a director for six years for allowing the company to employ three illegal workers. The disqualification followed an investigation by the Insolvency Service, working with the Home Office.

Mr Azad signed a disqualification undertaking, which was accepted by the Secretary of State on 17 August 2016, which bans him from being a company director and from being involved in the management of a limited company in any way for a period of six years from 7 September 2016.

The disqualification bans him from being a company director and from being involved in the management of a limited company in any way for the duration of the ban.

The matters of unfitness which resulted in the undertaking were:

Mr Azad failed to ensure that Eurolinen UK Ltd complied with its statutory obligations under immigration laws, resulting in the employment of 3 illegal workers. This breach was discovered following a visit from Home Office Immigration Officers on 27 September 2013 and resulted in a civil penalty of £15,000 being issued by the Home Office which remained unpaid at the date of liquidation.

Mr Azad also failed to ensure that the company correctly operated a Pay As You Earn Scheme, by failing to declare these employees to HMRC and accounting to HMRC for any deductions made from their wages.

The Insolvency Service rigorously pursues directors who break employment and immigration laws. Taking on staff illegally means those staff do not enjoy basic employment rights and is a clear breach of a director’s duties.

The public has a right to expect that those who break the law will face the consequences. Running a limited company means you have statutory obligations as well as protections, and this should serve as a warning to other directors tempted to take on illegal staff.

Mr Azad’s date of birth is 07 August 1963 and he resides in Oldham in Greater Manchester.

On 17 August 2016, the Secretary of State accepted a Disqualification Undertaking from Mr Azad, effective from 07 September 2016, for a period of six years.

The matters of unfitness, which Mr Azad did not dispute in the Disqualification Undertaking, were that:

Following the visit to Eurolinen’s trading premises, Home Office Immigration Enforcement (“HOIE”) issued Eurolinen with a civil penalty of £15,000 in respect of Eurolinen’s employment of illegal workers, due to be paid by 09 January 2014.

Eurolinen did not raise any objections or appeals against this civil penalty, nor did it make any payments to HOIE.

In addition, Mr Azad failed to ensure that Eurolinen correctly operated a Pay As You Earn Scheme, by failing to declare these employees to HMRC and accounting to HMRC for any deductions made from their wages.

In addition that person cannot act as an insolvency practitioner and there are many other restrictions are placed on disqualified directors by other regulations.

The Insolvency Service administers the insolvency regime, investigating all compulsory liquidations and individual insolvencies (bankruptcies) through the Official Receiver to establish why they became insolvent. It may also use powers under the Companies Act 1985 to conduct confidential fact-finding investigations into the activities of live limited companies in the UK. In addition, the agency authorises and regulates the insolvency profession, deals with disqualification of directors in corporate failures, assesses and pays statutory entitlement to redundancy payments when an employer cannot or will not pay employees, provides banking and investment services for bankruptcy and liquidation estate funds and advises ministers and other government departments on insolvency law and practice.”