Does the headline strike you as direct and un-pc, good it is meant to shock. Doing research over a long period of time can eventually reveal an underlying connection between information that initially seems completely separate or has at best some tentative links. We have identified one of these connections and it is a very disturbing connection that is being purposely kept off the discussion agenda by Oldham politicians and the left wing media outlets. We recently made the point about anomalous carers allowance statistics in central Oldham the article read: “Central Oldham wards are full of anomalous benefit statistics which are not easily explained by the social conditions of the areas. The latest shows 60% more people receiving carers allowance payments in the 022 area of Glodwick Oldham than receive payments in the area with the second highest number. Claimant no’s in 022 have increased by 39.4% in 4 years yet St Mary’s and Glodwick has the lowest percentage of people over 65 in all Oldham. We don’t remember Debbie Abrahams pointing out these figures while on her benefit’s protection crusade. Like all Oldham Labour politicians she is quick to identify hardship but purposely oblivious to the ludicrous levels of working-age benefit payments paid out in central Oldham wards.”

Carers allowance figures from the Department for work and pensions

A week ago we also pointed out “Another of those statistical Oldham anomalies tucked away in Oldham Council press releases that come without an explanation. Demand for school places at Kingfisher special school has grown by nearly 50 per cent in just over five years. Oldham SEN services are already failing Oldham children and families and the increase in pupil service demand cannot be explained by natural population growth. It is time that Oldham Council started being honest with the Oldham public.” Next came documentation on the outcome of an Oldham Council meeting about the “Consanguinity Outreach Service” consanguinity being a pleasant word to describe people who are genetically closely related. Although we wrote about consanguinity in Oldham many years ago this latest information clearly provided the connection between inbreeding, the huge increase in demand for special needs places and the anomalous area specific number of people claiming carers allowance. The document reported that “Oldham’s Local Safeguarding Children’s Board, and the North East Sector Child Death Overview Panel identified concern regarding children from black and minority ethnic communities being over represented in infant and childhood mortality figures. The largest cause of death in this group of children are congenital abnormalities and genetic disorders.” 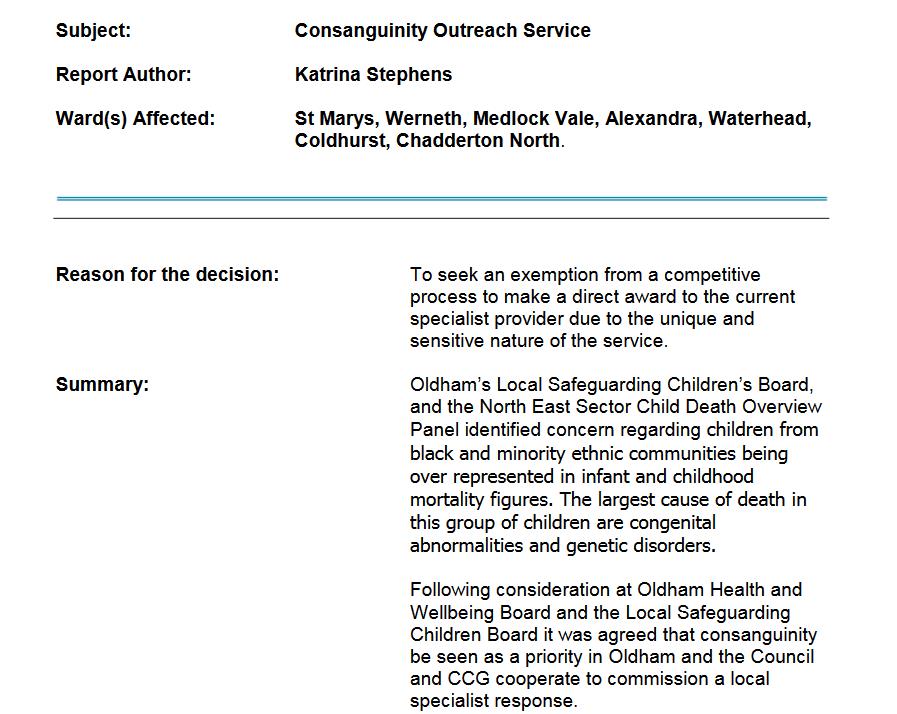 Taken from Oldham Council document on consanguinity in Oldham

So we now have a question for the Shadow Secretary of State for Work and Pensions MP Debbie Abrahams, what are the social care, benefit and medical costs incurred as a direct result of congenital abnormalities and genetic disorders caused by multigenerational inbreeding in Oldham?