The Economist/ Ipsos MORI August 2015 Issues index – concern about immigration is at the highest level ever recorded – half of the public now list it as a concern.

Bobby Duffy, Managing Director of the Ipsos MORI Social Research Institute, said: “We have never seen concern about immigration this high, and when one single issue reaches 50% it tends to signify that the public perceive that is something which needs to be addressed urgently. We await to see whether this 50% figure becomes a high water mark, or if consistent media attention specifically focussed on Calais pushes concern beyond this level in months to come.”

The related article in The Economist goes on to point out in light of current issues in the news relating to Calais that asylum seekers only make up a small percentage of the immigrant influx into the UK. Chronic-Oldham’s concerns on immigration centre on how small areas such as Oldham consistently receive large volumes of not only the poorest culturally introverted migrants from Asia and Africa but also 2 % of asylum seekers in Britain and the poorest from some of the EU10 Eastern European countries: Bulgaria, the Czech Republic, Estonia, Hungary, Latvia, Lithuania, Poland, Romania, Slovakia, and Slovenia. Romanian immigrants now make up over a third of the total migrant numbers moving to Oldham every year. It is ludicrous to constantly increase Oldham’s population numbers year on year by importing external poverty, criminality, the poorly educated and people from intolerant cultures that don’t embrace equality, put the laws of superstition over the laws of man and consider Oldham to be a free money socialist bubble external to the UK’s capitalist economic system. Oldham is already blighted by endemic poverty, deprivation, crime, lack of opportunity, low quality employment, housing and service shortages and a huge benefits bill that suppresses average wages in Oldham not only for those on over £9,000 a year tax credits but for everyone. As seen in recent newspaper articles and Oldham Council’s Roma specific policy documents Romanians in Oldham have poor English language skills, low levels of education and professional employment skills but high numbers of dependent children. Recently we had the case of missing 14 year old Romanian Camilia Lupu who’s parents lived in Oldham with their eight children and they could not speak English and had to make appeals through translators. During the Labour Party decade of mass immigration one third of local authority areas in England received three quarters of the total migrant inflow for Great Britain. As Ed Miliband stated in Manchester shortly before the general election, as he dug himself a political deep hole, it is not my job to tell people how many children they should have. Great words indeed for the Labour faithful yet it does seem the Labour Party think it is acceptable to keep population growth off the agenda whilst family tax credit funding alone takes £30 billion out of the UK budget the vast majority of which finances a lifestyle choice made by many UK born and migrant communities who choose to have large families without the means to financially support themselves. 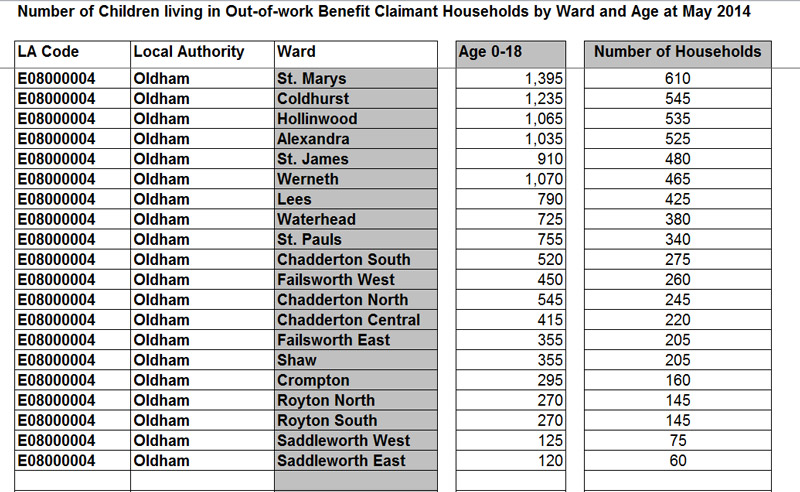